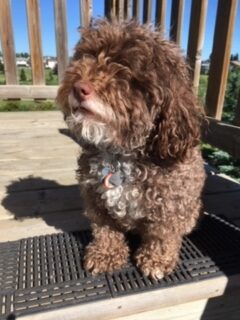 What kind of name was “Shortie?” M and her family didn’t like it either but that was the name they were stuck with. I determined we would change it if possible. Who knew if his name was a safe thing for him and if we changed it, we might run the risk of making him feel more insecure?

I searched the internet for information. After all, we’d never had a rescue pet before, and were unsure how to proceed. Turns out there were two opinions on the subject, and they were complete opposites to each other.

The first opinion/theory (‘cause after all, who really knows the mind of an animal?) proposed that the name they have been given, and have identified themselves with, means “safety” to them. They postulate that with all of the scary unknowns that change of any kind induces in your pet, it’s best to minimize those changes when possible. These are rescue animals, scared of so many things. They are used to their name—don’t rock the boat.

That seemed reasonable. We still hated the name Shortie, but were definitely in favour of not causing the little guy any more stress.

Then I read from the opposite camp’s offerings: their name is associate with bad memories—change it! Every time they hear their “name” they worry something bad is going to happen to them again. Sorta like when a child is holed up in fear in their room because a drunken parent makes a habit of beating on them when they come home. They hear them call, “Shortie…” as they are coming down the hall, and you can pretty much guess how they are feeling at that moment.

That clinched it. Shortie was getting a new name, and fast.

It was recommended that the new name bear a little resemblance to the old one, so we went with Sammy, the “s” sound at the beginning, and the “e” sound at the end being the same, so he would know we were talking to him.

How did Sammy like his new name? I don’t really have insight to his mind, either, but from the way his ears prick up, and the fact that he doesn’t cower in the corner when he hears his new name may be some indication it’s okay with him.

Just look at his picture. He’s a Sammy, right?

Mary Lou lives in Central Alberta with her awesome husband Theo and their rescue-dog Sammy.